I started to prepare my old desktop PC to become a development server running virtual servers on Microsoft Hyper-V.

The hardware specification is as follows:

My first attempt was to install the free standalone Hyper-V Server 2008 R2.

Everything went smoothly until I connected remotely with my Windows 7 laptop and started to create virtual hard disks. The PC started to hard freeze. Ctrl+Alt+Del didn’t help, it totally locked itself.

Very frustrating. I did have some bad experience with memory modules before, so I suspected that this was a case of bad memory modules.

Downloaded Memtest86 v4.0 and let it ran for an hour. Nothing. Rock solid.

Since the problem happened during creation of the virtual hard disks, I started to suspect some I/O issue with the disks. Removed all but the boot drive and tried again. No. Hard lockups continued. Bad.

I started to run out of options now. The PC had been running Windows Vista 64bit and Windows 7 64bit rock solid, without a glitch. What on earth could cause the Hyper-V behave like this?

Since the possibilities to troubleshoot is rather limited on Hyper-V Server, being console based, I decided to wipe my boot disk and install a full fledged Windows Server 2008 R2 with the Hyper-V role hoping that at least something in the event log could shed some light on the issue. Said and done.

It started good, I could create virtual hard disks and install operating systems without a glitch. I was happy.

I thought I had it going until I prepared remote management for the Hyper-V role, and connected to the server remotely….. bam! Hard freeze again.

This was not good at all. Re-booted, and tried to map a network drive from my laptop to the PC… bam! Hard freeze. Like on order.

Now I started to remember something… didn’t I actually had some network issues with the motherboard before? Indeed, sometimes the built in network card stopped working when I ran Windows Vista. A reboot didn’t always help, I was sometimes forced to do a full power cycle.

Reading the ASUS support forums I found out that there was a lot of people that had network issues with the built in Attensic L1 controller.

The joy of an Intel network card.

Ok, I had to find an alternative and went out and bought an Intel PRO/1000 GT Desktop Adapter, installed it, and disabled the on board Attensic controller.

Every since that moment, the PC has been rock solid. No freezes, no lockups.

Lesson learned: when it comes to network adapters, there is only one make that cuts it: Intel. Period.

So I have started to use Windows Server 2008 as my primary operating system on my laptop. And since I do a lot of development on virtual machines, I wanted to have my Hyper-V VM’s to connect to the internet through my laptop’s wireless connections. It turns out that Hyper-V doesn’t support wireless connections out of the box. Luckily, there is a workaround. I’ve found this blog post from Virtual PC Guy.

I will walk through the steps here.

Start the Hyper-V manager and select you server. 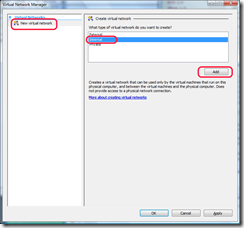 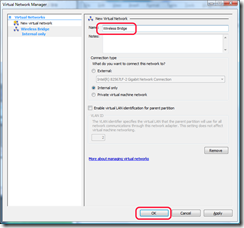 Open up the Network and Sharing Center from the Control Panel. 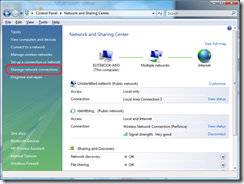 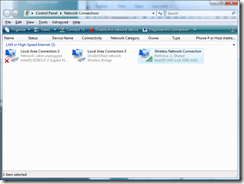 Select the Sharing tab, set the “Allow other network users to connect through this computer’s Internet connection” checkbox and choose the virtual network adapter you created above. (In my case it was named Local Area Connection 3). Click ok.

In the settings for the virtual machine, set the Network Adapter to be your virtual one created above. 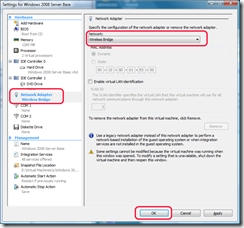